An Alternative Technique for Assembly-Line Painting of Big Battalions

The Problem- Plastic figures are sold attached to sprues, just as are plastic model kits. This eliminates handling of the product during production, reducing costs. For the modeler, this has merits and drawbacks.
There are two methods used to paint large units of figures; neither has addressed all requirements.
With figures left on the sprues, washing, priming and manipulating the figures for painting is for the most part easy, and reduces transfer of skin oils to the figures during washing and painting. However, the sprue does limit the directions that one can approach and reach all areas of a figure while painting. This can leave the occasional “holiday” or unpainted spot, which must be corrected after trimming the figure from the sprue. The attachment point/s must also be trimmed and painted after removal. This requirement defeats the purpose of leaving the figures on the sprue to begin with.
The alternative is to remove figures from the sprue before prepping and painting. This enables trimming flash and attachment points before washing and painting. Drawbacks are that when washing/degreasing the figures, additional care must be taken not to wash figures down the drain when rinsing the figures. Also, with the figures separate, there is the problem of introducing skin oils to the figures while handling after washing, which can prevent paint from adhering to the figure. This can be eliminated by wearing latex gloves while painting, but is bothersome for most hobbyists. There is also the problem of smudging paint during handling. This is a bit less of a problem when painting large numbers for figures as a unit. By the time the same figure comes up for the next color, the last color should be dry. After observing various methods employed by other hobbyists, after trial and error the following addresses all of the above issues satisfactorily.
The Solution- The method I propose is comprised of a rack, which holds a number of individual bases with stems, one for each figure. Each figure is attached to the top of its base with a dab of white glue, and the stem is held in the off hand during painting. The bases rest in the rack, with the stems protruding from the bottom of the board, between applications of paint and air dry. Submitted for your perusal and edification, are the details of “The Rack”.

Parts, Tools and Equipment-
- A section of “pegboard”; plastic is preferred, as repeated overspray may cause delaminating of a pressboard one.
- Two or three squares of ½” plywood, approximately 3”x 3”. A third support is optional; it may be required to support the middle of the rack, if it is long enough to sag.
- A quantity of aluminum large-head “roofing nails”; nail length should be sufficient to allow comfortable handling of the shank. Aluminum works well as the material is smooth, and less prone to rust or corrosion when used indoors.
- Drywall screws, approximately 2” long.
- Electric drill with suitable sized bit to drill pilot holes for the screws.
Assembly- The rack proper is made up of the pegboard and plywood supports. The dimensions of the pegboard, and number of supports, will be determined by the number of individual figures to be painted concurrently. As I have been producing 48+ figure battalions, I required about 60 holes to support the “stems”. I cut the plastic pegboard to achieve five rows of 19 holes each (5x19), which allows for the rank and file plus command figures, and for extra holes through which the supports are attached. Adjust the size, and the number of rows/columns to suit personal preference.
A support is attached at each end, and one supports the middle if required. Place a support under the furthest row at each end, parallel to the short edge, and mark two holes closest to the edges of the support, with a pencil. Mark a third support, to be attached under the center row of the rack if needed. Drill pilot holes in the top edge of the support where marked, and attach through the pegboard with screws. This completes assembly of the rack. 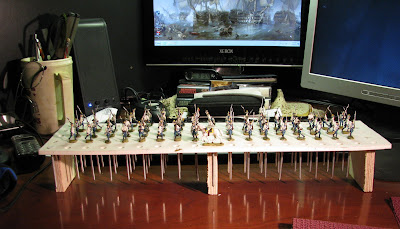 Gather the desired number of nails, one for each figure. I chose to grind off the points of the nails with a bench grinder. This step is optional.
Drop a nail in each available hole. Assembly is complete.
Use- Prepare figures in the usual manner, including removing the figures from the sprue after washing and rinsing. Place a small dot of white glue on the head of a nail, then set a figure firmly on to the nail. Place the nail through a hole in the peg boards and release. The weight of the nail, acting as ballast, will keep the figure upright and stable while it is in the rack. Repeat until all figures are set and placed.
With the figures thus prepared and placed, use “Rustoleum” or other brand plastic spray primer to undercoat the entire unit at one time. The “rack” allows for moving and turning all figures in the unit without touching any one directly. The spacing of the holes ensures that spray paint can reach and coat each figure evenly, and prevents them bumping into each other or falling over when the rack is moved. 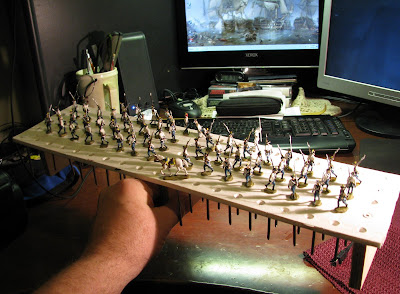 After allowing the figures to dry overnight, the individual painting can begin.
Remove one figure from the rack by pressing the bottom end of the nail upward with the forefinger of the painting hand, and grasp the shank of the nail above the rack with the off hand. 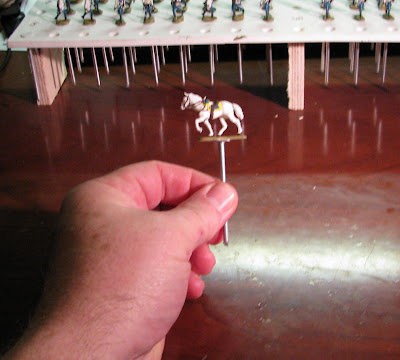 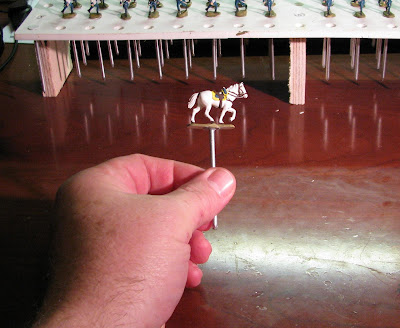 When done painting, washes, stains, or clear over coats can easily be done by holding the figure inverted by the stem and dipping head-first into the wash. The figure can be held in this way above the container to allow run-off of excess coating. Replace in the rack as above to allow figure to dry.
Afterthoughts- While contemplating the above project, it later occurred that this device and technique is suitable for any scale of figure, or leads as well as plastics. The ballasting effect of the aluminum nail would be less, but still helpful.
at 12:32 PM

This is an absolutely brilliant idea!

And very nice figures too.

GREAT idea - thanks for sharing!

Allen M.
Tidewater, VA, United States
An avid wargamer of both board-based and miniatures based games for over forty years; a dedicated believer in 20mm/1:72 scale plastic figures.